By Dave Ramsden|2022-07-21T12:17:24-04:00July 20th, 2022|Leadership|0 Comments
I recently asked three competing vendors to tell me in a few words what differentiated them from their rivals. They did not do a good job. I was looking for differentiation as Harvard economist Michael Porter speaks of it: a unique trait that makes the consumer willing to pay more for your product or experience, thus giving you a competitive advantage. A competitive advantage that leads to higher margins, and thus more profit. But the D-word seems to have been overused and watered down as of late, as evidenced by the aforementioned vendors.

Today many companies believe they must differentiate, but it seems like they are focusing on “differentiation” as an important word they need to speak to, not as a concept that has certain goals and standards associated with it. They don’t actively comprehend the strategic significance of the term. To bring higher profits, people need to be willing to pay more for your product or service. It needs to be rare enough to have a perceived value that outpaces the competition.

If you are lucky, when you ask about how a company differentiates itself, you will be given a short list of things they do well, a features list, or an award they have won. Sometimes the things are more meaningful to them than you. And sometimes it’s the same thing everyone else says they do; there is nothing different about it.

Let’s take an example from the messaging on three separate websites. The company names have been omitted to protect the innocent. They are all professional services companies and competitors with one another.

The first company claimed to have an advantage, which the lucky client can experience. I like advantages, so I read on. That advantage was never clearly defined, but it appeared to derive from three factors. I also like things that come in threes, so I continued.

First, they said they get to know you so they can have an authentic relationship. I’ve heard that before and it felt artificial. Don’t tell me you want an authentic relationship, just demonstrate authenticity in your actions. It’s like asking someone, “can I be honest with you?” As opposed to your typical dishonest discourse? Nevertheless, I understand they are a services company, so the relationship approach makes sense. But it is not unique.

I continued. Second, they have a process for on-boarding new clients. Thank goodness! I was worrying that it would all be done higgledy-piggledy! Seriously, solid processes add value, but do they truly set you apart? I read further, to find their third differentiator: they are one of 500 similar businesses to appear on a list of 500 similar businesses. Hmmm. Their uniqueness was overwhelmingly unique. This first company made some positive statements about themselves, but nothing that would entice me to spend more money just to do business with them. At least 499 similar companies exist (if we believe the list). Moreover, they all probably have a process and, given my dashing good looks and quirky personality, might like to have a relationship with me.

Not one to give up quickly, I moved on to the next company, which was a much larger. They had a section of their website devoted to answering the question, “Why us?” This was encouraging, since that was exactly what I was trying to figure out. What I found were a similar number of boasting points. First, they claimed to have been in business for 30 years. Well, I’m glad they weren’t out of business, which would have been a bad sign. And, in fairness, perhaps they had learned something in all that time.

I read on. Next, I learned that their enormous size was the result of a merger between two companies. Two companies who, themselves, were the result of mergers and acquisitions among many other companies. These roll-ups are pure gold because, as any COO will tell you, the whole is almost as great as the sum of its parts. And what’s more, there is nothing that runs smoother than a franken-company slapped together out of cannibalized parts in the interest of being larger. Size matters.

And then finally I hit it, the big news: They were a Leading Professional Services Company. This got my attention. Not just anyone can claim to be a leader in their field. I mean, I am, but I got special permission to say this from my wife. If they got permission from my wife, it would establish quite a lot of credibility in my eyes. She’s a discerning woman.

Anyway, on the off chance that they had received permission from my wife I wasn’t going to argue the point, so I moved on to look at the third and final company.

This organization distinguished themselves by helping businesses optimize and accelerate things. There was also some future-proofing and probably something about digital transformation but, in truth, I had stopped reading. Further down the page I glimpsed the fact that they were also included in the 500 similar businesses appearing on the list of 500 similar businesses- what were the chances? And not only that, but they also have a methodology, which is almost as good as a process. I’m not 100% certain, but that sure sounded good. Nevertheless, I was still confused. 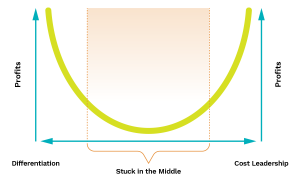 So, I set aside all of this unfair hyperbole and returned to Porter’s Generic Strategies model, which  demonstrates that at their core most businesses are either competing based on cost or differentiation. More importantly, to have the kind of competitive advantage which makes them highly profitable, Porter states that a business needs to fully commit to one path or the other. If they try to do both they will be stuck in the middle. The middle is that dreaded place where their product or services are not unique enough to convince people to pay a premium for them and they are also too expensive to compete effectively based on price. Think Sears.

The subjects of our rude analysis are good companies, but their offerings (in the brief, exaggerated, and unscientific analysis we gave them) fail to be uniquely valuable. And they are clearly not positioning themselves as the low-cost option. They talk about being unique, but they haven’t truly found or communicated a method of real differentiation; the kind that attracts buyers and can’t be easily copied. The likely result? A daily struggle to rise above limited profitability. They might be stuck in the middle.

Are you stuck in the middle? SMB’s often find themselves in this place as they scale, because the early stages of entrepreneurial growth demand that they try to everything. There is a lot of experimentation going on as they discover themselves and the corporate strategy that works for them. But the need to define a path forward and commit to it becomes stronger as they mature. And if they are not competing on cost alone, they need to find a unique draw their competitors can’t easily copy. Equally important- they need to communicate it effectively, so the right buyers see, want, and consume what that they have to offer!

Dirigo is a leadership consulting firm with a reputation for helping organizations develop, grow, and transform. Our clients value an outside perspective to help identify and overcome barriers to both organizational and individual performance. We strive to make a unique difference through our Dirigo Academy, Business Consulting and Brand Behavior services.

About the Author: Dave Ramsden